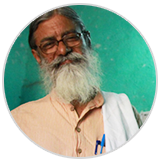 Anand had graduated in engineering from IIT Kharagpur. For a short while he worked in a private industry and could have easily chosen the beaten path towards prosperity. But he decided that he would utilize his intelligence and skill for the development process. This attempt though was extraordinary on the personal front but was also in harmony with the contemporary social conditions. In 1970 youth had joined hands together for social transformation getting inspirations from the social movement under the leadership of late Jayprakash Narayan. Thousands of young boys and girls willingly jumped in the movement for rural development and social transformation. Anand was a representative of that generation. He worked along with Kusum tai who shared his views. This was something special because we find many social workers who work single handedly but working full time for the society along with your family   required extreme courage and loyalty.

Anand’s specialty was that he was an engineer and it reflected everywhere in his work. Many people as industrialists, doctors and people having MSW degree also carry out social work but the contribution of an engineer in the social activity simply stands out. This becomes evident on studying the example of Anand’s social work. Engineer possesses the awareness of science and technology and this helps him to understand the systems in his surroundings which results into inherent systematization in his work. Engineers have a different way of thinking and that’s why they are able to find harmony between creativity and transformation. This might not happen with every engineer but it was fortunately true for Anand. Anand’s engineering-oriented view point was evident in each of his activity whether it was regarding plan, progress or social relationship. Being an engineer contributed to a large extent to his unique personality.

His passion for the rural area, the tribal people, the villagers, his love for agriculture, nature and aquaculture, for education and empowering people is inspiring.  He was an epitome of grace, humility, transparency, gratitude, knowledge, passion, dedication, commitment, perseverance, empathy and love for humanity.

He never took the credit of anything to himself but gave it to the persons who did the job. He treated all as equal with no airs about himself.  He was a natural magnet blending his deep knowledge and personal qualities with the bureaucratic quagmire, emerging with solutions, action plans that benefited the people of Ambegaon immensely.

Mama is being missed but his soul and teachings are always present to provide the guiding light for the future of Ambegoan and its people.