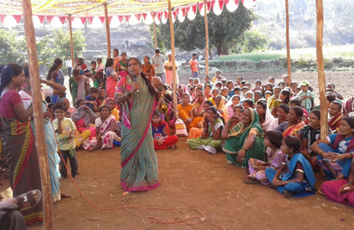 Self-Help Groups are informal associations of people from the same socio-economic background who choose to come together to find ways to improve their living conditions and solving their common problems. They help to build Social Capital among the poor, especially women. ... by promoting small savings among them.  The savings of these members are kept with a bank safely.   Keeping this view in mind Shashwat introduced “Bachat Gat (Self-Help Groups) to help the displaced & affected tribals of Dimbhe dam area.

The main objective of this Self Help Group is to bring the displaced aadivasi’s above the poverty line by providing income generating assets to them through bank credit and government subsidy. The Self-Help Groups are the major component of this activity. Some other objectives are:

1. To inculcate the savings and banking habits among members.

2. To secure them financially and morally .

3. To help them to avail loan for productive purposes.

5. To gain from collective wisdom in organising and managing their own finance and distributing the benefits among themselves.

6. To create group feeling among women.

7. To enhance the confidence and capabilities of women.

9. To encourage habit of saving among women and facilitate the accumulation of their own capital resource base.

10. To motivate women to take up social responsibilities particularly related to women development.

11. To act as the forum for members to provide space and support to each other.

An economically poor individual gains strength as part of a group.

Besides, financing through Self Help Groups reduces transaction costs for both lenders and borrowers.

While lenders have to handle only a triple SHG account instead of a large number of small-sized individual accounts, borrowers as part of an SHG minimize expenses on travel (to and from the branch and other places) for completing paper work and on the loss of workdays in canvassing for loans.

SHGs have helped immensely in reducing the influence of informal lenders in rural areas.

SHGs help borrowers overcome the problem of lack of collateral. Women can discuss their problem and find solutions for it.

34 women of Self-Help Group are doing their savings regularly, and addressing some of the social issues in their villages.

In the proposed phase Shashwat will strengthen their activities by facilitating them to form their federation so that they will increase access to bank loans and they also will function as mass based organizations to address gender issues.

Shashwat will also organize training of cultivating ornamental fisheries, fish processing e.g. dried fish, and salted fish and initiate it as income generation activity. Shashwat has ensured that women are fully involved in the activities it supports. As one example, during the process of updating land ownership documents to secure land tenure, the names of more than 500 women were added to land deeds as co-owners alongside their husbands. Although initially only one member of each family was allowed to join the fishing cooperative, this has been expanded to include one woman from each family, making it possible for women to participate alongside their husbands. Women have also assumed leadership roles in governance and decision-making; there are now three women on the fishing cooperative’s board of nine directors. Women have also acted as ambassadors for the community in meetings with government officials.

The ornamental fish initiative developed by Shashwat was spear-headed specifically with the income generation needs of local women in mind. The activity provides a valuable source of income for these women, independent of their husbands. In a good year, women can earn up to INR 1,500 per month through it. The project has also involved a great deal of capacity building and training for local women and resulted in the creation of several more women’s self-help groups.

The non-fishing, monsoon months are challenging for community members dependent on the fishing sector for their livelihood needs. This is particularly true of the landless Katkari tribes. To address this, Shashwat has introduced the practice of ornamental fish rearing as an alternative income stream for local fishers. This new field of work that has been particularly lucrative for local women. Participating women have formed themselves into 32 self-help groups which together constitute a federation. Through the self-help groups, women have received training in the upkeep of ornamental fish, which are reared in cases provided by CIFE. When an initial pilot project proved successful, the National Fisheries Development Board provided a further 16 cages. This activity has provided significant income for tribal women. The women’s groups now also make and sell glass aquariums containing a variety of ornamental fish, while wholesalers often visit the dam site directly with offers to purchase their entire output. Additional support is required, however, before this enterprise activity becomes self-sustaining.

Shashwat is helping the displaced & affected tribal of Dimbhe dam area with the communities of the manikdoh & Chaskaman dam areas  to improve upon the same by forming Self Help Groups amongst them. Specifically, Shashwat likes to work towards supporting the people in these dam areas to develop their confidence and capabilities. Shashwat volunteers are sharing their knowledge and experience with the dam-displaced & affected families living around the dams within about 30-50 km and supporting their efforts to come out of the morass of poverty and deprivation.