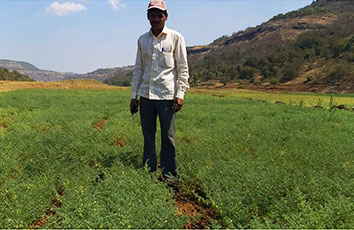 The tribal farmers that are displaced due the construction of Dimbhe Dam conduct farming on drawdown land, once the water level in the dam reduces beyond a certain level. During this initiative, a land area admeasuring around 700 – 800 hectares is available for farming for at least 4 to 5 months in a year. This initiative has been implemented through Shashwat Trust since year 2006. Varieties of crops like maize, wheat, fenugreek, gram as well as other crops are cultivated over 350 hectares of land. Around 323 farmers are cultivating crops in their own fields by farming on drawdown land and generating crop yield in a satisfactory proportion. The drawdown land farming project has been kicked off with an objective of preventing migration for the sake of employment and enablement of residents to earn their livelihood and yield food adequate to fulfill family’s food requirement for 12 months. 19 engines and 142 pipes have been distributed to tribal farmers in Junnar Taluka while 20 engines and 400 pipes have been distributed to tribal farmers in Ambegaon Taluka. As on today, a land area admeasuring around 947 acres is available for farming on drawdown land.

One of Shashwat’s first endeavours was to initiate dialogue between tribal communities and the Government of Maharashtra. The goal was to leverage financial support for the construction of terraced paddy fields on the steep slopes overlooking the reservoir - slopes which, until that point, had limited the ability of the displaced communities to undertake productive agriculture. This negotiation took years. In 2002, the state government agreed to fund a pilot project under the rubric of the Maharashtra Rural Employment Guarantee Scheme. The government agreed to pay one third of community wages, what amounted to approximately INR 2,088 per farmer. Shashwat was entrusted with overall management of the project, contributed an average of INR 1,250 per farmer.

Between 2002 and 2004, 203 farmers participated in the construction of paddy terraces on their lands. The work was carried out using the traditional padkai system - a practice of community mutual aid in which community members work together on a rotating basis to complete work on individual plots of land. Young people from the villages were trained in measurement work – a capacity building bonus – collecting data that was then cross-checked and certified by government department staff. The collective endeavour brought 13 hectares of land into cultivation and provided a temporary source of employment for local farmers. As a result of this project, annual paddy outputs increased from 68 to 98 kg of rice per family. This substantial increase in grain yield meant that farmers were able to secure their household food supply for 10 to 11 months, rather than six to seven months, as was previously the case.

The paddy terracing pilot project was the first of its kind in Maharashtra. Because of its overwhelming success, the government was compelled in 2010 to implement a full rural employment scheme in the area. Initially sanctioned and funded by the Tribal Development Department, the programme expanded from five villages in 2010 to 20 villages in 2011-2012. In September 2012, the Secretary of the Maharashtra Employment Guarantee Scheme visited the area and met with villagers, Shashwat staff, and researchers from Prayas, a local non-governmental organization. After the visit, the programme was approved for replication in other hilly areas of Maharashtra under the Mahatma Gandhi National Rural Employment Guarantee Scheme (MGNREGS).