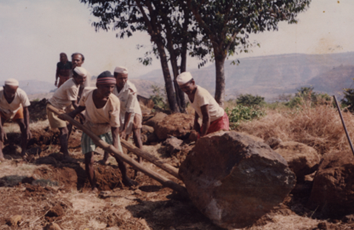 ‘Padkai’ is an age old system of self-help practiced among tribals in Pune district, particularly in hilly area and ridges that enclose Ghod river. In this system  people from the village/ pada collectively work together to develop the plots of land for cultivation either by way of terracing the existing land ( repairs/ bandh bandisti) or by way of clearing the trees on the private forest land (dali sheti).

The system is fairly equitable, where the whole village works in groups, turn by turn for one day each on the field of each member of the group. When all the members are covered in the first round, the next round begins.

“SHASHWAT”-proposed that the same practice can be extended for the Employee Guarantee Scheme (EGS) of Govt of Maharashtra. Proposal indicated that each family can be provided work for 125 days in a year and more land can be brought under cultivation, which will lead towards more sustainable livelihood. The first experiment of this sort was carried out in four villages during 1989-93, where 203 families were involved, approximately 107 days of work per family was provided and total 24.68 hectares were brought under cultivation.

Tribal people of the hilly, high rainfall, steeply sloping, difficult approach area of the Western Ghats in the catchment of the Dimbhe Dam, Dist. Pune, Maharashtra, traditionally grow paddy in small terraces made with stone bunds on their lands of 10-20% gradient. The western part of Ambegaon block has 58 tribal villages, of which 33 fall in the catchment of the Dimbhe dam. Sashwat’s voluntary group has been working with the Mahadeo Koli adivasis, in the tribal area of Ambegaon taluka for the past 21 years. The major concentration of “SHASHWAT” is in the villages behind the Dimbhe Dam Lake.

The Mahadeo Koli tribals were forced to practice shifting cultivation on their steeply sloping lands, as the area under paddy cultivation is barely 9% of the cultivable area. Even then, their food production was below sustenance level. Hardly 4,700 hec. land in the area is today cultivated under the kharif (rainy) season, and there was no second crop or irrigation. The 3000-5000 mm annual rainfall coupled with steeply sloping lands, leads to severe soil erosion. Reduction in silt load of the water coming into the Dimbhe dam could be checked by paddy field terracing - building small stone walls across selected shallow-slope areas / depressions/ small nallah beds.

PADKAI is time-tested local technology used as participatory system of terracing. This is a traditional system of self-help, rather in the manner of a temporary labour co-operative. The paddy terrace on a hillside thus results in

The modified system of PADKAI adopted by the people was as following: Whole villages / hamlets worked in groups, of about 15 men/women and 5– 6 pairs of bullocks turn by turn for one day each on the field of each member of the group.  When one round was over and all members of the group were covered, the next round began.