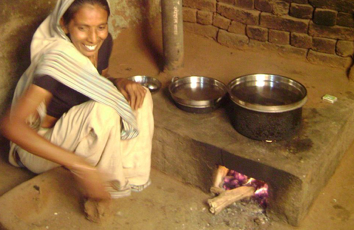 The tribals womens were using traditional chullah for cooking food and they still rely on firewood, cow dung cakes, crop residues and charcoal as energy resource, despite the number of problems associated with traditional use like –safety issues, time consuming in fuel collection, health hazards and reduced working efficiency. This traditional chullahas produces lot of carbon gases that pollutes air and cause health problems for these tribal women. The health problems due to emission of carbon gases includes asthma, low birth, weight, tuberculosis, cataract, nasopharyngeal cancer and laryngeal cancer The environmental, health and economic  benefits  of  using  a  smokeless  and  fuel  efficient  chullah  are  enormous. It was, therefore, felt essential to introduce smokeless chullah to the tribal women in timbe dam affected area of pune district. Nirdhur chullah (Smokless Oven) is an effective alternative to the traditional chullah. The Nirdhur chullah is simple in design and operatives similarly as the traditional chullah used by many families except that it has two burners and a chimney. Its fuel efficiency is also high thus reducing the quantity of fuel.

Group of 10 tribals from Dimbhe visited Kolhapur district to interact with families in the area using smokeless cook stoves. The visit was organized by SGP (Small Grant Program) officer Mr. Rohit Masara, project officer of AVH Corporate Sustainable Development Project, CEE, Kolhapur. One sample model cook-stove was procured from Kolhapur. The amount of wood required for and effectiveness of smokeless cook stoves was studied by local residents. Interns of M. Tech from Centre for Technology Alternatives for Rural Areas (CTARA) IIT Bombay are conducting efforts to train tribal residents of the area in the making of an alternate low smoke model; they have helped to get a sheet metal mould fabricated in Pune. 13 stoves have already been made with the help of this mould.

Efforts have been also initiated to modify and improve the wood burning stoves being used at the residential primary school Vandeo Vidya Mandir of Shashwat at village Aghane; these stoves are meant to cook meals for sixty tribal and primitive tribe children taking education in Std I to IV.  A different model stove was prepared for three stoves grouped together with a common airway; modifications to the same have been incorporated in June 2014 and the ladies responsible for cooking have responded positively. The work is ongoing under the guidance of Mr. Vijay Honkalaskar who has recently completed his PhD in low smoke cook stove development at IIT Bombay.