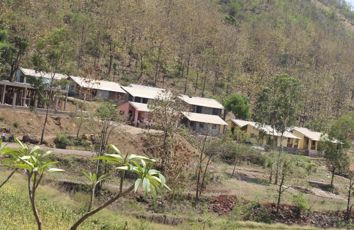 Land development is making an area of land more useful.  It is the act of making some area of land or water more profitable or productive or useful. Shashwat is an initiative which developed in response to a  range  of  challenges  related with the land faced  by  indigenous  and  tribal  communities  in the Pune district of India’s Maharashtra state. The initiative works with  Koli  Mahadeo,  Thakar  and  Katkari  tribal  peoples  displaced,  or  otherwise  negatively  affected,  by  the  construction  of  the  Dimbhe  hydroelectric  gravity  dam.  Construction  of  the  Dimbhe  Reservoir  in  2000  completely  submerged  11  tribal  villages  and  resulted  in  the flooding of cropland in another 13 communities. Shashwat has worked  to  develop  alternative,  sustainable  livelihood  activities  for  those living around the area, including in villages within the dam’s  catchment  area  and  those  communities  negatively  affected  by demarcation of the Bhimashankar Wildlife Sanctuary in 1985.

Developing land for agriculture and enhancing the possibilities of irrigation are the two crucial needs for food security and livelihood protection in tribal area. Shashwat has started working on developing plots for paddy cultivation by way of terracing since 1989. Padkai programme mainly focuses on this issue. However, while implementing the padkai programme, Shashwat encountered two major problems which were related to land titles  (Khatephod) and ownership of land by  money lenders over the generations (Savkar Jamin issue.)

Through lobbying and partnership with local government & Tribal Dev. Dept., Shashwat has provided 186 farmers living in villages adjacent to the reservoir, with lightweight pumps and pipelines for crop irrigation on the cultivatable land which emerges when the water levels drop. Grain harvests have improved substantially, improving food security for an economically marginalized population & migration from 14 villages stopped last year.

Each  year,  when  the  reservoir  level  drops  and  water  is  released  through the dam for downstream irrigation, 400 to 600 hectares of land  become  available  for  seasonal  planting.  To  enhance  and  expand  local  agricultural  options,  Shashwat  lobbied  the  government  for permission to work with the displaced communities to farm this land  and  make  it  productive.  The  government  agreed  to  lease  the  land at half the standard land use charge and nearly 180 farmers are now growing crops on about 200 hectares of land.

An additional obstacle was that, until 2006, local farmers lacked the equipment  necessary  to  irrigate  these  lands,  thereby  limiting  the  types of crops they could grow and their ability to maximize harvest outputs.  Again  through  a  combination  of  lobbying  and  proposed  partnership  with  the  government,  Shashwat  was  able  to  provide  65 farmers (in 13 farmer groups) with irrigation pipelines and light-weight  hand-pumps.  By  2012,  over  200  farmers  had  been  able  to  access  140  hand-pump  and  pipeline  sets.  The  land  is  now  being  used  to  grow  pearl  millet,  wheat,  fenugreek,  vegetables  and  potatoes,  providing  food  security  for  three  to  four  months  of  the  year  and  supplementing  other  livelihood  activities.  Out-migration  from  the  villages  during  this  traditionally  sparse  work  season  has  been  substantially reduced.

Other broader efforts have been made to improve local agricultural productivity, including through partnerships with local academic institutions.  From  2007-2012,  students  from  the  Indian  Institute  of  Technology  in  Mumbai  have  undertaken  10-week  internships  with  Shashwat. As one example of the contributions made by the interns, a group of students designed and constructed a two-kilometre irrigation channel to provide water to the village of Patan, an intervention  which  has  seen  a  doubling  of  wheat  harvests  of  local  farmers.

On  the  agriculture  side,  the  construction  of  paddy  fields  above  the  reservoir  has  helped  to  avoid  siltation,  controlling  erosion  and  lengthening  the  functional  life  of  the  dam  and  reservoir.  The  steep  gradation  of  the  slopes,  in  combination  with  the  region’s  high  annual  rainfall,  causes  a  great  deal  of  soil  erosion.  With  no  interventions and no terracing, projected siltation rates for Dimbhe dam are in  the  range  of  30  million  cubic  metres  over  the  assumed  100-year  life of the project. The paddy fields, however, trap silt far above the reservoir at an average rate of about 150 cubic metres of silt per 500 square  metres  terraced  land.  Shashwat complements its  terracing  work by planting of shrubs, trees and grasses on trench and mound structures on the banks of the reservoir to maintain soil integrity. The plants trap silt carried down by rainwater in areas where terraces donot extend all the way down to the water’s edge.

Shashwat  is  supporting  local  farmers  to  secure  land  tenure.  The  organization  pushed  for  a  needed  update  of  land  ownership  documents to reflect the names of current owners and laborers in place of their ancestors. Shashwat also pioneered the practice of ‘village camps’ for upgrading  land  ownership  documents  and  has  received  strong  support  from  government  officials  in  this  activity.  Between  2004  and  2010,  43 such events were held in the area by Shashwat and the government revenue department. The approach involves holding set days during  which  depositions  from  all  claimants  to  village  land  are  recorded.  The  names  of  those  currently  cultivating  the  land  are  then  recorded  on  the  land  title  documents  in  place  of  their  ancestors,  which  makes  it  easier  for  community  members  to  access  government schemes and legitimizes their land tenure.

Making paddy terraces of 300 –500 sq. meters area each, with stone bunds on steep hill slopes by all the farmers coming together and working on each other’s fields, is a traditional participatory self-help activity called Padkai. We partially supported about 200 families of 4 villages with grants to make one such terrace each year during 1989-93. This led to increase in food availability for the average tribal family from 6-7 months to about 11 months per year. The tribal people then put forth this scheme for consideration of the Govt.  In June 2002, the Govt. of Maharashtra sanctioned this scheme on experimental basis for four tribal villages but with only one-third wages. The people completed the work by 2004 and we financially supported them. It was further realized that more than half the land ownership records were still showing the names of the great grandfathers. Hence in a four year long exercise by the Revenue Dept, Shashwat and the local villagers, up-gradation of land records was done in 39 village level camps, to reflect the names of the present day descendants. Govt of Maharashtra finally sanctioned the Padkai program of making paddy fields with large stone bunds on steeply sloping private lands in July 2009 for 38 villages after 9 years of lobbying efforts. Over 2000 farmers have already applied and plans are being sanctioned by the Agriculture Department.