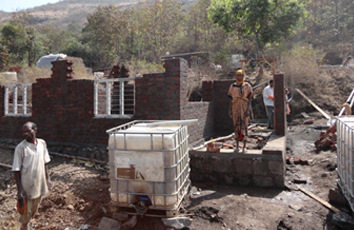 While implementing the pilot project in four villages, the complexity of having the up to date land records in form of Sat Bara Extract was realised. The process of Khatephod is very time consuming, complex and expensive. Shashwat realised that while nontribal farmers are willing to spend up to Rs 20,000 in bribes for Khatephod (dividing the land among the heirs and updating the land records accordingly- pherphar), it is next to impossible for the tribals to complete the process on their own.  It was a major challenge in implementing the pilot project. With the good will of Mr Prabharkar Karandikar then the Regional Commissioner and strong bureaucratic support at his level resulted in implementation of  ‘Shasan Tumchya Dari’ (Govt at your door) programme of the government. The Regional Commissioner ordered for the camp approach and camps in each village were held, first in four pilot villages on priority basis.  When revenue department indicated that constraints in human resource may delay the work, Shashwat trained two volunteers from each village to fill up the forms, update the records and writing the records of 7/12 and 8 –A. The process began in 2003 and within eight months 52 applications were processed and 194 new land accounts were created. This facilitated the implementation of the pilot padkai (EGS) programme.

The camp approach was extended to many villages with the initiative from Mr Thombare, Dy. Commissioner EGS Pune Division during the year 2005-06.

In one of the meetings, one senior woman and active participant in all Shashwat’s struggles; raised the issue of having land title in women’s name. She suggested that while their names can be withdrawn from their ancestral properties, women should be given equal share in the husband’s property as it is the land they are now cultivating. This issue was debated in the meetings and majority of the people accepted the suggestion. However, there were sporadic cases where men didn’t give the consent to add their wife’s name as co-property holder.

As a result in majority of the cases, women now jointly hold the ownership of the land.

While the programme of Khatephod is by and large a success, it has suffered a set back. The process has become stagnant after the transfer of the concerned government officials at the block level. Many cases are pending only for the Tahasildar’s signature.