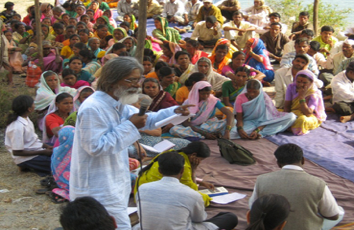 There are various issues faced by Katkaris. Shashwat is continuously working to resolve these issues. Some of them are discussed below

This is one of the rear efforts for income generation for primitive tribes. But this experiment will require persistent efforts and support from Shashwat, especially from Mr.  Kapoor. Like Padkai this is not one time activity.

A Fisheries workshop was organized by Shashwat at Manchar from 30 Jan. to 1st Feb. 2008. 60 participants from Maharashtra, MP and Chhatisgarh attended. On 31 Jan 2008, a Field visit of workshop participants and Fisherfolk meeting was organized at village Old Ambegaon and attended by about 200 fisherfolk. On 01 Feb 2008, Fisheries Workshop at Manchar, was conducted and on 02 Feb 2008 an Awareness Program on Aquarium Fish at village Old Ambegaon was conducted by CIFE which was attended by 100 fisher persons, mostly women from 8 villages of Dimbhe dam area.

Ever since fish seed was been introduced in the reservoir, the local fisher-folk had stopped fishing with small size nets, in order that seed may be allowed to grow. However, this was causing serious livelihood problems to about 100 of the poorest families who are dependant only on fisheries for their livelihood. Most of these are landless Katkari (about 89) and Thakar (about 11) families. It was therefore necessary that these families be provided food grains at least for 6 months for their survival. After 6 months, the fish seed put in would become larger than the local fish humbli, and then the fisher-folk could survive on local fish catch.

We appealed to the Tehsil office of Ambegaon block, which promptly took up the work and all families were provided ration cards in about 3 weeks. Then we approached the ration shop owners and got them to stock up the food grains for these people. During Oct. to Dec. ’06, Shashwat ensured that all these families were provided 35 kg food grains (22kg wheat @ Rs. 2/-per kg and 13 kg rice @ Rs. 3/-per kg, sugar 1kg-3 kg)  on their ration cards and Shashwat paid the shop owners directly from funds collected for this purpose, as mentioned above. The expenses were about Rs. 115/- per family on the average. Shashwat helped with the provision of food-grains till Dec. 2006. One very beneficial offshoot is that the ration shopkeepers now have to stock the PDS grains for these people and the people now know that they can get 35 kg of PDS food grains every month from the ration shops.

Nursery was initially started to provide self employment opportunity for Katkari families, residing around the Dimbhe reservoir. This project had received some set backs. Twice due to the excessive rains, saplings in the nursery suffered. Due to flooding and some dispute, it had to be relocated.

A group of  katkari’s was trained in a nursery in Ratnagiri in nursery techniques and efforts were done to collect the local seeds of different species. Efforts were made to grow two broad categories of saplings, one with market value and second the local species for the aforestation programme. The experiment of training Katkaris was not very successful due to cultural reasons. After that Shashwat has trained a local person from Mahadeo koli community

89 of the 214 members of the Dimbhe Fisheries cooperative are of the primitive tribe Katkari. These people are landless and houseless, mainly working for part of the year on the few brick kilns in this area. They usually migrate from place to place in search of work. They used to live in small thatched huts on the edges of the Dimbhe reservoir (see photo) and are among the poorest of the people tribal people here. Shashwat has helped them with boats and nets, bringing some stability in their lives. Slowly their first generation started going to school.

In 2009, Shashwat had arranged to purchase  land for their housing and donated 75 sq mtrs each in the name of 26 families (22 Katkari primitive tribe families and 4 Thakar tribe families). The house plots were legally made over in their name which made them eligible for the Govt. housing scheme. With much follow-up, finally houses for 22 Katkari families are approved & sanctioned @ Rs 1 lakh each, comprising hall, kitchen, WC, bathroom, electrification & compound. As they themselves are brick-makers, these people have planned to make their houses themselves. Govt. has entrusted Shashwat with the responsibility to ensure completion of all houses of 250 sq ft + covered verandah 18 ft by 8 ft. as per approved plan & in time.